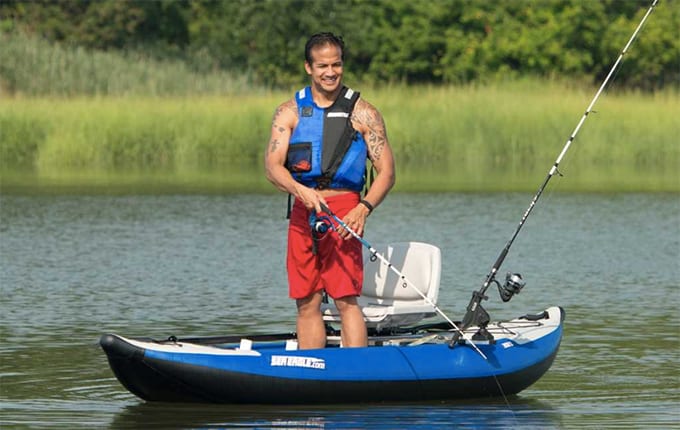 The Sea Eagle 300x Explorer is the perfect choice for kayakers who need a durable, versatile kayak that can do just about anything. The 300x is the smallest kayak in Sea Eagle’s popular Explorer lineup, and it’s a great choice for all-around solo kayaking.

In 1968 Sea Eagle released their first inflatable kayak, breaking into the world of inflatable watercraft. Family owned and operated, Sea Eagle has continued to improve upon their earlier designs, creating one of the best inflatable kayak lineups available today. Inflatable kayaks have revolutionized the sport for many people, bringing an element of convenience and portability that traditional kayaks cannot match.

In Sea Eagle 300x review, we will look at this popular inflatable kayak’s construction, durability, optional configurations, warranty, and more.

Equally at home in the whitewater or on a lake, the versatile Sea Eagle 300x Explorer kayak is certified for class four whitewater and offers excellent stability. It has 16 super-fast self-bailing drain valves that can be opened for whitewater or closed for dry flat-water paddling.

Measuring only 9’10”, the 300x is extremely maneuverable and easy to handle. With a removable slide-in skeg, the 300x’s open water tracking is much better than other comparable kayaks.

Portability is also top-notch. One of the best perks of owning the 300x is that it will easily fit into any vehicle, and weighing in at only 28 pounds, this kayak definitely won’t break your back when you’re loading and unloading it.

One of our top concerns with any inflatable kayak is safety and durability. With the reinforced hull and the durable 1000 Denier material, the Sea Eagle 300x is built to last and will hold up well even in harsh conditions. The wide stance of the 300x provides great stability and boosts paddling confidence. 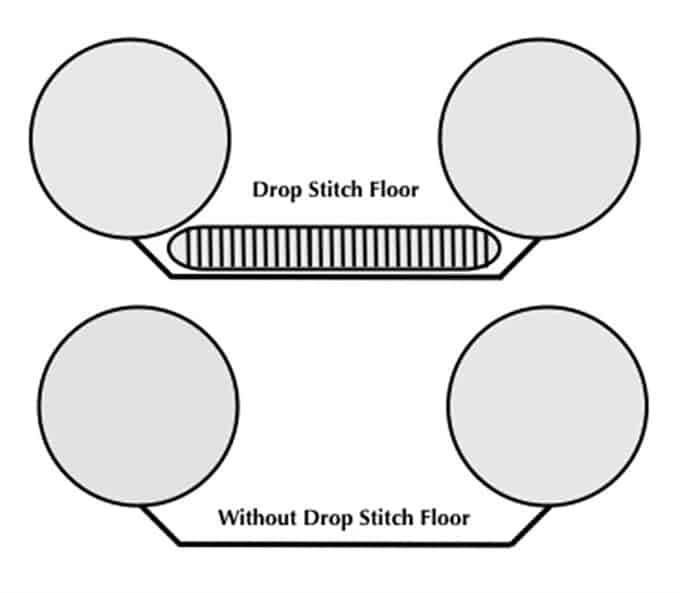 When the waters get rough, the 16 self-bailing drain valves can be opened to quickly drain out water. When conditions mellow out, you can easily close the valves to stay high and dry. 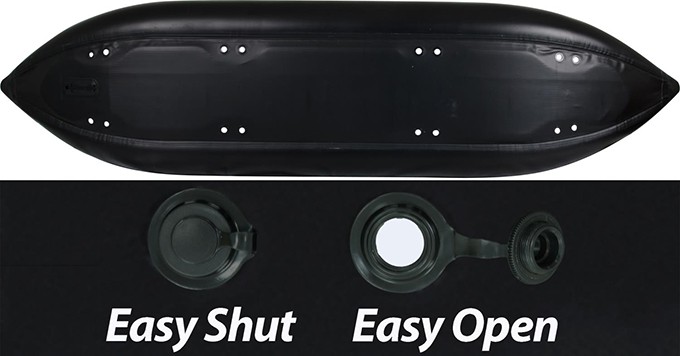 The 300x sports a large removable skeg that has been specially designed to aid in tracking across flat water. The bungee cord storage areas and twelve stainless steel D-rings provide plenty of spots to secure gear, and the 300x has 3 one-way air valves which allow it to be easily inflated in only 5 minutes.

The deflated size of 24″ x 16″ x 6″ makes the 300x super easy to pack into any vehicle. Storage is also super convenient, as the kayak can be stashed under a bed or in a closet. 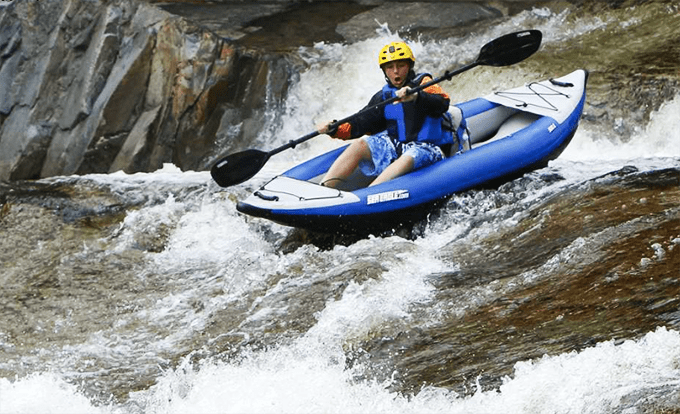 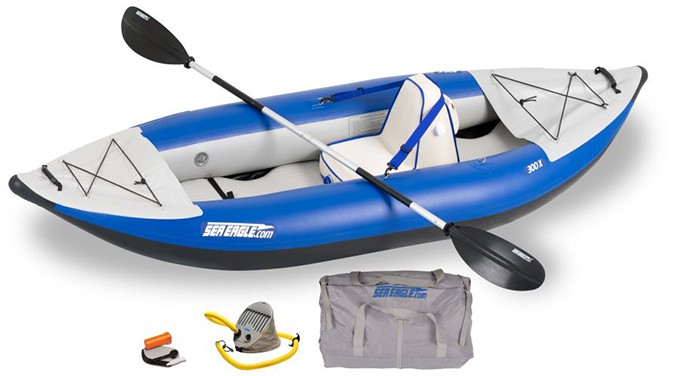 Additionally, all Sea Eagle inflatable kayaks are backed by an industry-best 3-year warranty and 180-day risk-free trial period. This is a company that really stands behind their gear, and the fact that they’ve been in business since the ’60s is great for additional peace of mind.

In addition to the Sea Eagle 300x Explorer Deluxe package, there are 4 more optional configurations offered by Sea Eagle… 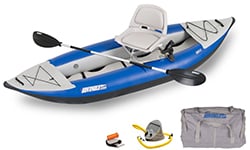 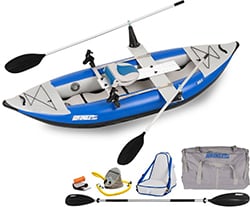 How long does it take to inflate the Sea Eagle 300x?
It only takes about 5 minutes to fully inflate the 300x.

How portable is the Sea Eagle 300x Explorer compared with other kayaks?
The 300x is super portable. It packs into a compact 24″ by 16″ carrying bag that allows you to take this little kayak anywhere. It can easily be checked as extra baggage for a flight or tucked away in the trunk of your car.

Can the 300x handle rough waters?
The 300x is extremely durable and has wonderful stability. It sports reinforced hull drop stitching and a solid exterior to withstand impact with rocks, logs, and anything else that might get thrown at you. The Sea Eagle 300x is rated for Class IV whitewater.

Can I bring my dog in the 300x?
Absolutely. The 300x has an extremely tough outer skin that is virtually indestructible — your dog’s nails won’t damage the kayak.

Is it possible to use the 300x as a tandem kayak?
No, the 300x is the smallest model in Sea Eagle’s Explorer lineup and it’s a solo kayak. If you’d like something a bit roomier that will allow you to use it as a solo or tandem kayak, we would recommend the larger 380x Explorer or Sea Eagle’s 14′ 420x model. 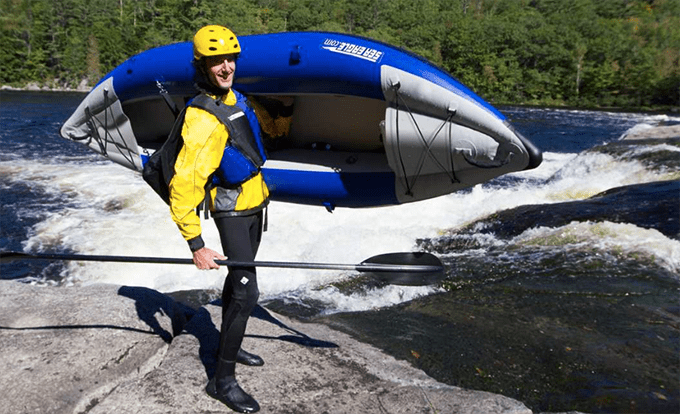 We’re extremely impressed with the Sea Eagle 300x Explorer. From whitewater to fishing on the lake, the 300x performs well and is built to last a very long time. Just as all of Sea Eagle’s inflatable kayaks, the 300x Explorer’s design is well-tested and the kayak is made from the highest quality materials.

The 300x’s 16 valves work fast to bail water out of the kayak when in the whitewater, and they’re easy to close when the conditions change. Versatility is one of the 300x’s strongest areas, and there aren’t too many things that this little inflatable kayak can’t do.

We love Sea Eagle’s 3-year warranty 180-day risk-free guarantee. This proves that the company stands behind their gear and wants you to be 100% satisfied with their kayaks. Of course, a warranty is only good if the company is around to honor it, and the fact that Sea Eagle has been in business since 1968 should give you a lot of confidence when purchasing a Sea Eagle kayak.

All in all, if you’re looking for a great performing inflatable solo kayak that can handle anything you throw at it, look no further than the Sea Eagle 300x Explorer.