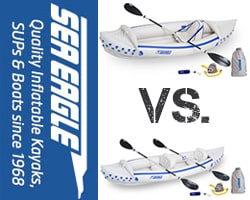 The Sea Eagle 330 and 370 are two extremely popular inflatable kayaks from Sea Eagle’s Sport line. Both kayaks will work for solo and tandem kayaking, and both share similar construction and features. So which kayak is the best one for you?

In this post, we’ll go over the key differences between the Sea Eagle 330 and the Sea Eagle 370 inflatable kayaks. We’ll compare the dimensions, specs, and various packages for sale. At the end of the post is a handy comparison chart which will allow you to easily compare both inflatable kayaks side by side. Please note that we compared the baseline configurations of both models, so some details such as seats and paddles will change depending on the model you choose.

If you’re on the fence about which Sea Eagle kayak to buy, hopefully this post will shed some light on the main differences and help you to decide which one is better for you.

The Difference Between the Sea Eagle 330 and 370

While these kayaks are extremely similar, there are some very important differences to be aware of.

The second key difference between the two kayaks is the max carrying capacity. The Sea Eagle 330 has a max capacity of 500 pounds, while the Sea Eagle 370 can handle 650 pounds. Due to the additional carrying capacity and buoyancy requirements of the larger 370, Sea Eagle used a 38 mil Polykrylar material vs. the 33 mil used on the 330. The thicker 38 mil material basically feels the same, but it does improve durability on the 370 by about 10%-15%.

Last but not least, there are significant differences in the packages for sale for each model. The base model for the Sea Eagle SE330 is the Pro Solo Kayak package which includes a single Deluxe inflatable kayak seat, a Sea Eagle 330 carry bag, a 7’10” AB30 paddle, an A41 foot pump, and a small inflatable kayak repair kit.

Next up, are the package options for the 370. The base model for the Sea Eagle SE370 is the Deluxe package which includes two 7’10” AB30 paddles, two SEC kayak seats, an A41 foot pump, the Sea Eagle 370 carry bag, and a small inflatable kayak repair kit. 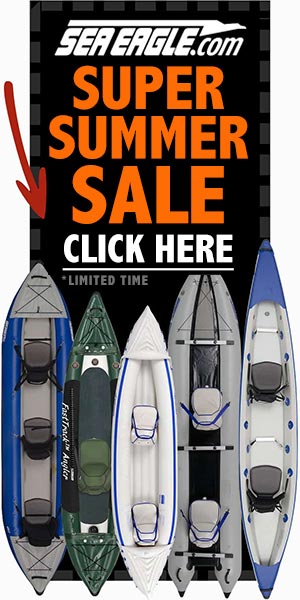