Rather than wasting precious time and energy manually pumping up your kayak, many opt to buy an electric kayak pump that allows them to conserve their paddling energy and maximize the time spent on the water.

The Best Inflatable Kayak Pumps for Sale in 2016 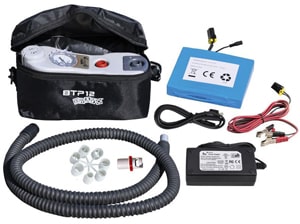 The top-of-the-line Bravo BTP12 electric kayak pump is a two stage pump that quickly and efficiently inflates your inflatable kayak to the selected PSI.

The BTP12 pump kit includes a nice, softshell carrying case, adapters for all of the commonly used air valves, a 102″ cable with alligator clips, and a 72″ hose.

The BTP12 is really easy to use. Simply hook up the BTP12 to its power source, adjust the PSI dial to your desired inflation pressure, and press the start button.

This electric kayak pump works in two stages. A high-volume fan is first employed for rapid inflation, followed by a piston for high-pressure.

When the PSI that you selected has been reached, the pump will shut off automatically.

The max PSI of this pump is 14.5. If you’ve got a kayak that has a large volume requirement or needs to be inflated to high PSI levels, the BTP12 is an excellent choice. 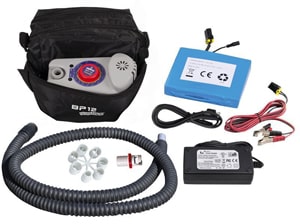 The Bravo BP12 is the little brother of the BTP12. The BP12 electric kayak pump is a lightweight, single stage pump that’s an extremely efficient little workhorse.

Like its big brother, the Bravo BP12 pump package comes with a nice carrying case, valve adapters for all of the most popular air valves, a 102″ cable with alligator clips, and a 72″ inflation hose.

Like the BTP12, the BP12 is really easy to operate. However, the way it works is a little different because of the fact that it is a single stage pump.

To pump up your kayak with the BP12, you simply connect the pump to its power source, dial in the desired PSI, and hit the start button.

After the PSI that you selected has been reached, the pump will shut off automatically.

The max PSI of this pump is 14.5. The BP12 is a good choice if you have a smaller kayak that doesn’t have particularly high PSI requirements. For larger kayaks and higher inflation pressures, the BP12 can overheat. 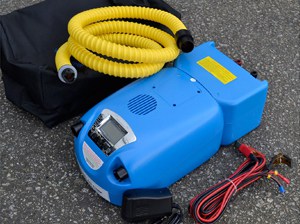 Last but not least, is SEAMAX’s 12v electric kayak pump. This pump is another two stage pump that is also a good choice for inflatable kayaks.

As with the other pumps we’ve reviewed, the SEAMAX pump is available with a battery and without a battery. Both packages include adapters for the most commonly used air valves, a built-in digital air gauge, a power cable, carrying case, and an air host kit.

Since the SEAMAX kayak pump is digital, it works a bit differently than the Bravo pumps.

First, you will need to power up the pump by pressing the “Power” button. Then, instead of using a dial as with Bravo’s pumps, you simply select the inflation pressure by pressing the “up” or “down” buttons on the pump’s control panel. The pump will quickly inflate your kayak to the set PSI and then automatically shut off.

During the turbo fan stage, the kayak is rapidly inflated. Then, the dual cylinder stage kicks in and inflates to high pressure.

Overall, the SEAMAX is another solid choice if you’re in the market for an inflatable kayak pump. The max PSI isn’t as high as the Bravo pumps, but as long as that’s not a concern, this pump will do just fine.