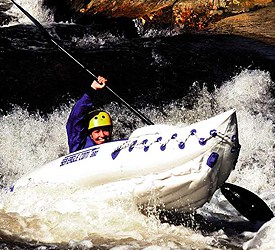 The Sea Eagle 330 is the smallest inflatable kayak in Sea Eagle’s ultra-popular Sport series. Coming in at 11’2″ in length and 34″ wide, the SE330 is a great option for solo kayaking or as a smaller tandem kayak.

Sea Eagle has been in the inflatable boat and kayak business since 1968, and they really know how to put together a great inflatable kayak. The Sea Eagle 330 is extremely well-built, and the affordable price point means that this is a kayak that’s within everyone’s reach.

In this Sea Eagle 330 review, we’ll cover the kayak’s top features, the high-quality materials and construction, the specs, what’s included with the kayak, the SE330 packages currently for sale, and more. 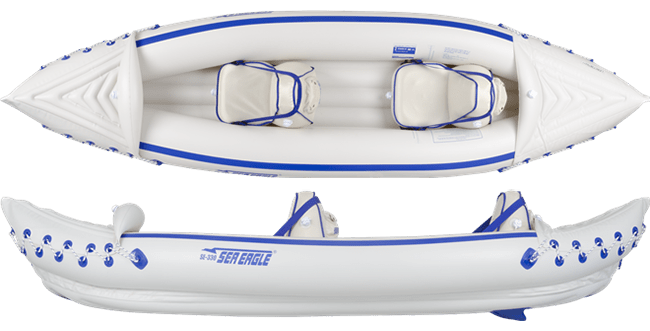 Overnight camping trips, whitewater rapids, kayak fishing, recreational paddling… the Sea Eagle 330 can do it all. The SE330 is as versatile a kayak as you’ll find, and it’s well-suited for beginners and advanced paddlers alike.

Sea Eagle has earned a stellar reputation over the years for selling extremely high-quality inflatable kayaks at affordable prices, and the SE330 continues to build on that reputation. Sea Eagle is a family owned and operated company, and their customer service is second to none. The Sea Eagle 330 kayak is backed by their industry-leading 3 year warranty against manufacturers defects, and they also include an unheard of 180 day risk-free trial period.

The SE330 inflatable kayak is a nice blend of durability, versatility, and affordability. It’s a great entry-level kayak that’ll hold up for many years, and the price tag won’t break the bank. 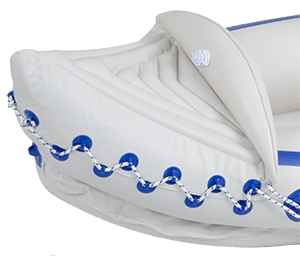 Poor-quality air valves are the achilles heel for many inflatable kayaks, especially in this price range. They constantly crack, leak, and are the source of a lot of trouble.

The five deluxe one-way air valves on the Sea Eagle 330 are as nice as they come. They’re super easy to use and extremely reliable, which is a breath of fresh air.

The SE330’s one-way valves don’t let air escape after it has been pumped in, and the enlarged valve opening dramatically speeds up inflation and deflation times.

After inflating the 330, you finalize the seal by putting the outer cap back on the valve which makes it completely air tight. 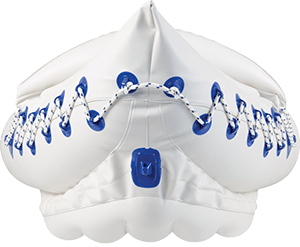 Sea Eagle’s Sport kayaks were originally made with a 7 tube I-beam floor. Recently, Sea Eagle has moved away from the 7 tube design to a 5 tube setup.

The tubes used in the latest Sea Eagle 330 design are larger, increasing the overall rigidity of the inflatable kayak’s floor and improving both speed and tracking.

The new 5 tube floor design also elevates the paddler and allows the bulk of the weight to be carried by the floor instead of the side chambers.

Double Skegs in Rear for Speed and Better Tracking 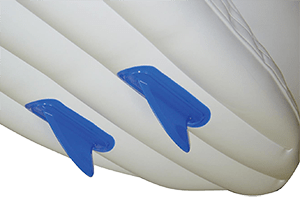 At the rear of the Sea Eagle 330 is a double skeg setup, which greatly improve the kayak’s paddling speed and tracking ability. Many cheap inflatable kayaks come without rear skegs, resulting in a kayak that tracks poorly and is difficult to paddle long distances.

The twin skegs are super durable and made of a rugged, molded plastic that is pretty much indestructible. You won’t have to worry about running into rocks or the beach and breaking them — they’re built to last.

The Sea Eagle SE330 is NMMA and CE certified, and the kayak has a Class III whitewater rating.

The 330 is constructed with a super tough Polykrylar outer skin that is scratch and cut resistant, and the kayak has high-frequency welded seams. The kayak’s three chambers are located at the port, starboard, and floor areas.

The SE330 also features a convenient grab line located at the bow and stern of the kayak.

Last but not least, it takes about 6 minutes to inflate and fully assemble the Sea Eagle 330, and the recommended inflation pressure is 1.1 PSI.

Sea Eagle includes everything with the SE330 that you need to get paddling.

The base model configuration is the Sea Eagle 330 Pro Solo Kayak, and it comes with the following:

The Deluxe kayak seat is Sea Eagle’s top of the line seat. It features additional back support for added comfort while paddling.

Made out of heavy duty 440 denier nylon, the Sea Eagle 330 carry bag is extremely durable. It includes a draw string and a strap so that you can throw it over your shoulder for easy carrying.

This bag will hold your Sea Eagle 330 kayak when it’s deflated, as well as the additional accessories.

The included AB30 paddle features an aluminum shaft and tough Fibrylon paddles. The AB30 weighs 2.62 pounds and collapses down into four pieces for easy transport and storage.

The A41 is a super durable, easy to use high-pressure foot pump that is made out of tough ABS plastic. It packs down neatly when not in use and is extremely portable.

The last 330 configuration is the Sea Eagle 330 QuikSail Kayak package. Want to sail your SE330 kayak? If so, then this is the setup that you’ll want.

This configuration includes two 7’10” AB30 paddles, an A41 foot pump, a QuikSail, a carry bag, and a small inflatable kayak repair kit.

The Sea Eagle 370 vs. 330 — which inflatable kayak is better?
Great question. Both are outstanding inflatable kayaks and share the same features and high-quality construction. The main difference is that the Sea Eagle 370 is longer and can support a maximum weight of 650 pounds. The Sea Eagle 330 can support a max weight of 500 pounds. Also, there are different packages offered for each model — for a complete breakdown of the differences between the SE370 and SE330, please read our Sea Eagle 330 vs. 370 article.

Is the Sea Eagle 330 assembly difficult?
Not at all! The SE330 is super easy to assemble, and you can have the kayak fully inflated and setup in less than 10 minutes. 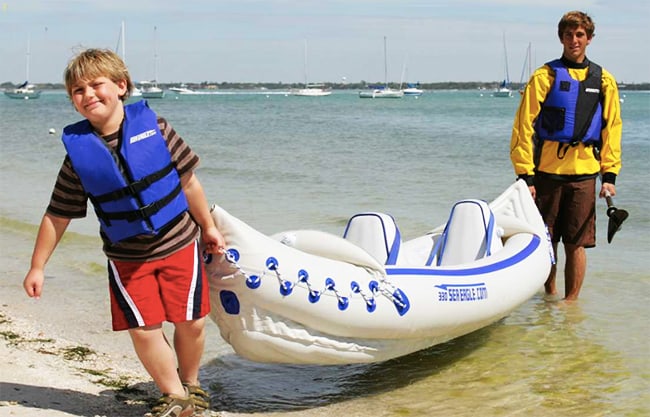 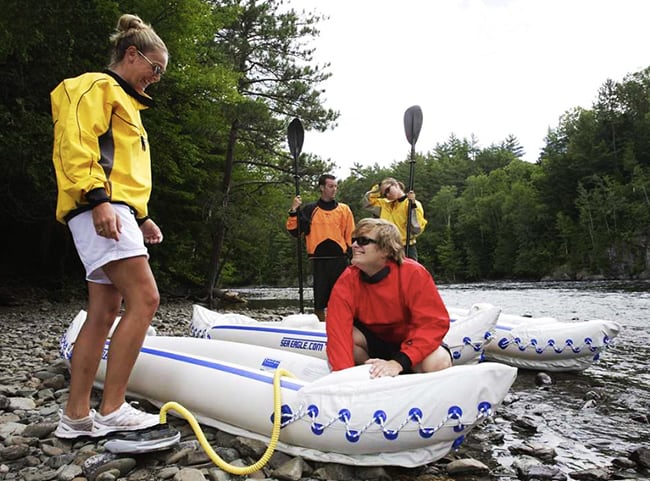 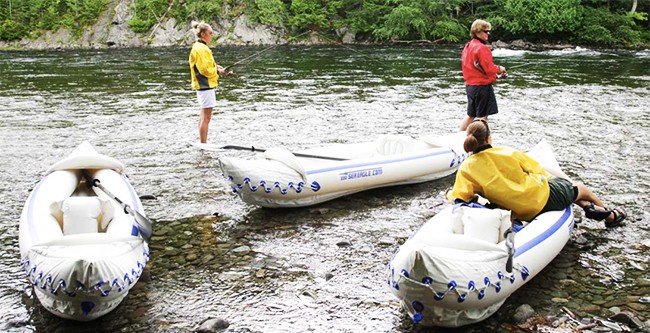 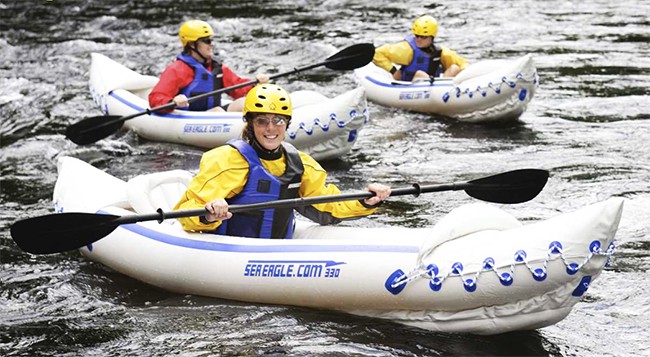 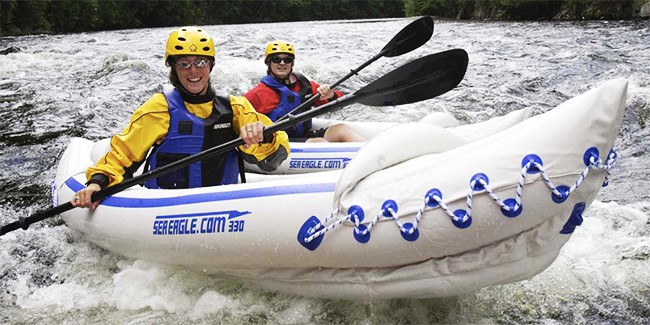 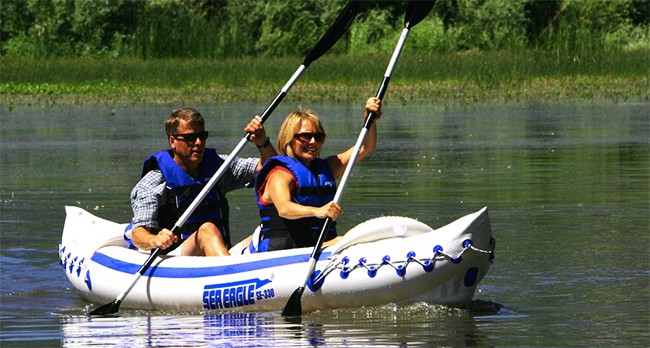 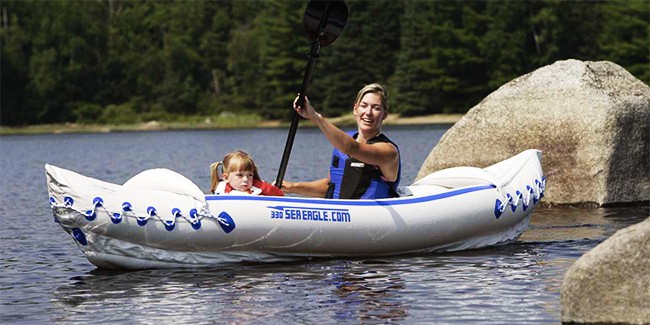 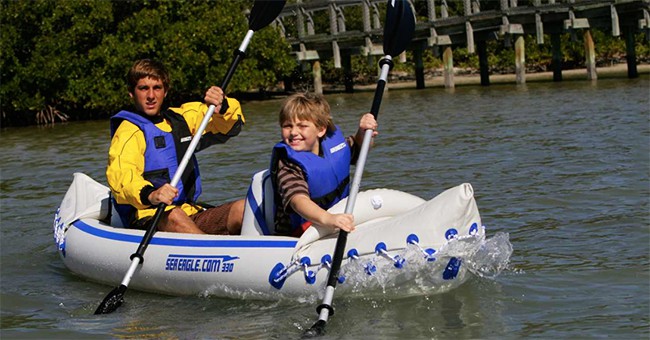 If you’re in the market for an entry-level solo or tandem inflatable kayak, or you just don’t have a big budget, you’ll be hard-pressed to find a better kayak than the Sea Eagle 330. You simply won’t find a better built, more versatile kayak in this price range anywhere.

We love the fact that Sea Eagle includes everything needed to get paddling with each of their packages, and it’s nice to have a selection of multiple kayak configurations to choose from. This allows you to customize your SE330 with exactly the type of setup you want, and Sea Eagle has a nice line of additional accessories to choose from.

Lastly, Sea Eagle’s 3 year warranty and 180 day risk-free trial period blows away the typical 1 year warranty seen on most inflatable kayaks. Sea Eagle stands behind their kayaks 100%, and they’ve been selling inflatable boats and kayaks since the 1960’s so you know they’re not going anywhere. Highly recommended.

Click Here for the Best Price on the Sea Eagle 330